Content marketing, as the name suggests, relies heavily on content production, and so does Inbound Marketing. So, as an inbound marketer, it is rather important to ensure your spelling and grammar are on point. As the Managing Editor here at BeInbound, I come across a lot of grammar and spelling errors, some more common than others, and while writing and editing comes natural to me, I understand that this isn't the case for everyone. Luckily, HubSpot have compiled a list of 25 grammar mistakes that everyone needs to stop making, so I don't have to write a ranty blog post myself. Go ahead, read, learn and polish your grammar! 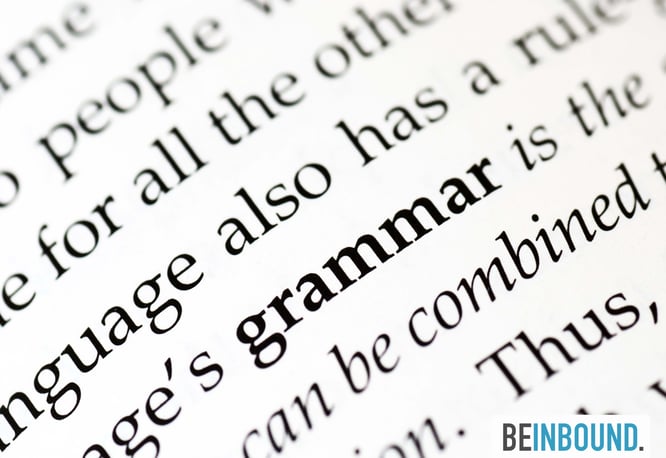 Most possessive nouns will have an apostrophe -- but where you put that apostrophe can be confusing. Here are a few general rules to follow:

If the noun is plural, add the apostrophe after the s. For example: the dogs' bones.

If the noun is singular and ends in s, you should also put the apostrophe after the s. For example: the dress' blue color.

On the other hand, if the noun is singular and doesn't end in an s, you'll add the apostrophe before the s. For example: the lizard's tail.

Simple, right? If you want a deeper dive into the rules of possessive nouns, check out this website.

The en dash can also be used to represent time spans or differentiation, such as, "That will take 5–10 minutes."

The em dash, on the other hand, can be used to set off quotation sources, such as, "'To be, or not to be, that is the question.' —Shakespeare."

This one is another one of my pet peeves. Most people confuse them when they're talking about something changing another thing.

When you're talking about the change itself -- the noun -- you'll use "effect."

That movie had a great effect on me.

When you're talking about the act of changing -- the verb -- you'll use "affect."

That movie affected me greatly.

Can't get enough of this wonderful post? Head to the HubSpot blog to read the full story, Grammar Police: 25 of the Most Common Grammatical Errors We All Need to Stop Making. And if you want to do more than just get your writing in tip top shape, download our free ebook and become the best inbound marketer yet.